How would you describe the faith of Islam (the most important guidelines to follow, etc)?

It is the way of the Prophets and the elect of human beings since our father Adam through our father Abraham then Moses, Jesus, and Muhammad, upon them blessings and peace, consisting in true worship of our Creator and excellent living and dying until we return to Him and enter everlasting life, in which this life forms less than a drop in the ocean; a way the formal description of which is
[1] belief in the one God alone without partner, son, or spouse, in the angels, the Divine Books, the Prophets and Messengers, the Day of the Resurrection and Judgment, and the foreordained Divine decree that includes both good and evil, and
[2] praying the five prayers in their appointed times every 24 hours, remitting the poor-due, fasting the month of Ramadan, and performing, if physically and monetarily able, the pilgrimage to Makka.

I have read that Islam believes that the God of the Jews and Christians is the same God of the Muslims, is that a correct statement? And that Muhammad was the last and final Prophet of God - the blessings and peace of Allah on the Prophet - correcting misleading concepts in the above religions. So then all three religions are from the same origin?

All three dispensations are indeed from the same Divine origin and we believe that Religion is one just as God is One, the same One that sent all the Prophets and Whose basic message does not change.

What would you say is the relationship of Islam to Judaism and Christianity today?

Islam is the unadulterated form of their message but addressed to all creation, a universal Last Testament.

I recently traveled to Israel and Egypt and felt the Middle Eastern tension for myself. There are so many political issues with the state of Palestine and Israel. Is the root of the conflict primarily religious?

No more for the Zionists than for those whom they have been plundering, oppressing, and killing mercilessly since that conflict began.

It seems as though there is a real hatred towards the Jews, is that true? More so than towards Christians? Why?

There is no hatred towards "the Jews and Christians" but hatred towards injustice and oppression, hence expressions as those attributed to Jesus in the Gospel such as "whitened sepulchres" and "race of vipers" to characterize attitudes that ultimately stem from satanic pride and which are also excoriated in other Divine admonitions including the Psalms and the Qur'an.

The reason why the latter describes the Christians as generally closer to the truth is only insofar as they tend to be more devoid of that trait; further, they reject only one of the Prophets of God (Muhammad) while the others reject two (Jesus and Muhammad).

What is the greatest hindrance holding Islam back from advancing? How can this barrier be removed?

It is advancing by the grace of God despite any appearance to the contrary. The ending has already been written and it is to the honor and glory of God and His Prophets, let the enemies try what they may.

I have read that physical action towards unbelievers is not to result in violence towards the innocent, but when I think of what has gone on in the Sudan or even the 9/11 situation, I see the innocent being killed. Is this only those taking Islam out of the context Muhammad intended?

As far as any true and sincere people of faith and goodness can see, true Muhammadan Islam is the last remaining living Divine recipe for enlightened belief and right living in the highest desirable sense for all human beings. It makes perfect sense that the enemies of the human race should therefore focus on the poisoning, corruption, and demonization of Islam whether through aggressive, insane chaos or through a reptilian discourse that poses as reasonable and historical, but strives even more desperately and aggressively to represent the followers of the most perfect man ever to walk the earth as fanatic loons. See, for example, the hate site "jihad watch."

However, the last word belongs to the owner of this Religion which is God Himself--a fact of which there is no escape. Hence the vanity of the misrepresentation that is going on, of which the situations mentioned are mere elements, and their ultimate irrelevance to the endurance of Islam as the last Godgiven way of safety and salvation.
Hajj Gibril
GF Haddad
[Sun, 21 Mar 2004]
(Emphasis by the webbeditor)

What exactly is the purpose behind revelation (the Qur'an)?

Even though there can be many drawn out explanations, the purpose of revelation in plain and simple words is to connect with Allah, our Creator. Revelation came to show you and me the quickest path to Allah in order for us to have a bond with our Creator.

Someone who is connected to revelation regularly has a direct path to God. And anytime people think they are moving forward in life while leaving revelation behind, they are actually losing out even if there is a temporary feeling of gratification.

Hold on to revelation. Not only will you fall in love with Allah but holding onto the words of Allah will be a means of His love showering upon you.

Why Does Allah Allow Suffering and Evil in the World?

Indeed Allah is All-Powerful (Al-`Aziz) and He is able to do all things {`ala kull sha’in qadir}.

The question should not be why does Allah allow suffering, but how much Allah protects us and saves us all the time in spite of our violations and negligence.

Sometimes Allah does punish people because of their violations of His laws whether they are physical or moral.

Suffering can also be a test and trial for some people. Allah allows some people to suffer in order to test their patience and steadfastness. Even Allah’s Prophets and Messengers were made to suffer.

Sufferings occur to teach us that we must adhere to Allah’s natural and moral laws.

Why Does Allah Allow Suffering and Evil in the World? Dr. Muzammil H. Siddiqi 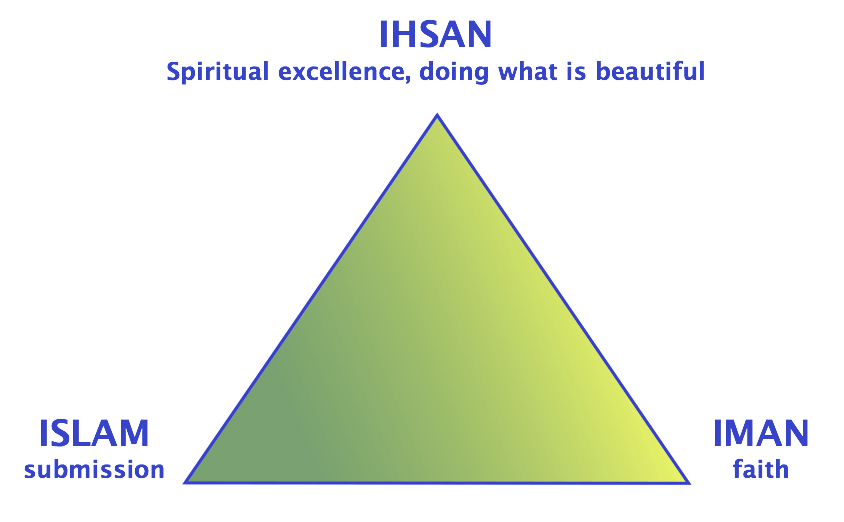 The dīn of Islam is threefold:

Dīn, دين ≈ religion, life transaction, also ’deen’ , meaning the way of life in the surrender to the One, Allah سبحانه و تعالى, following the example of the Prophet - may Allah bless him and grant him peace.

What one gives in this life, such as spiritual awareness, prayer, poor-due, etc. will be (a.) an investment into the abode of the Hereafter, if Allah will grant it and (b.) to a certain extent a protection and spiritual advancement in this life already - nothing is lost, and Allah knows best and most!

5 When will the Hour be established?

The Prophet ﷺ said, "Belief is to believe in Allah, His Angels, His Books, His Apostles, and the meeting with Him, and to believe in the Resurrection." The man asked, "O Allah's Messenger ﷺ

The Prophet ﷺ replied, "Islam is to worship Allah and not worship anything besides Him, to offer prayers perfectly, to pay the (compulsory) charity i.e. Zakat and to fast the month of Ramadan." The man again asked, "O Allah's Messenger ﷺ

What is Ihsan (i.e. perfection, benevolence or spiritual excellence)?"

The Prophet ﷺ said, "Ihsan is to worship Allah as if you see Him, and if you do not achieve this state of devotion, then (take it for granted that) Allah sees you." The man further asked, "O Allah's Messenger ﷺ

When will the Hour be established?"

{ Verily, the knowledge of the Hour is with Allah (alone). He sends down the rain, and knows that which is in the wombs.}" 31-34
Then the man left.

Shorturl of this page: http://bit.ly/_islqa

The 8 Most Popular Pages