The Superstition of Science

The now globally spread, originally Western idea of science, which René Guénon calls ’the superstition of science’, is all too reductive to be true, it is in fact a devastating error on many levels. Truth is of course more than the eye - or the nano-microscope - can see. The root for this misconception lies in the 250 - 450 year old history of how in old Europe the sources of knowledge (epistemology) were reduced to sensible, measurable phenomena - since the ’Renaissance’ and ever after, then globally spread to national elites by Western dominance, or as in the case of modern China, where the leadership adopted a very extreme form of materialism and anti-tradition.
So what was once a problem of Western Europe is now an even bigger worldwide problem.

In ”East And West” René Guénon starts off with this premise:

"The civilization of the modern West appears in history a veritable anomaly: among all those which are known to us more or less completely, this civilization is the only one which has developed along purely material lines and this monstrous development, whose beginning coincides with the so-called Renaissance, has been accompanied, as indeed it was fated to be, with a corresponding intellectual** regress; we say corresponding and not equivalent, because here are two orders of things between which there can be no common measure.

This regress has reached such a point that the Westerners of today no longer know what pure intellect** is; in fact they do not even suspect that anything of the kind can exist; hence their disdain, not only for eastern civilization, but also for the Middle Ages of Europe, whose spirit escapes them scarcely less completely.

**true spirituality: → What Is True Spirituality?

True spirituality is what connects man and woman to the Highest, to the Supreme Center. It connects you to Truth, to the Real, to the invisible, intangible Source of everything. It will show you your real place in this life, not what you may wish it to be, but what it is now and will become one day. DRG

12 Quotes from East And West

What Is True Spirituality? 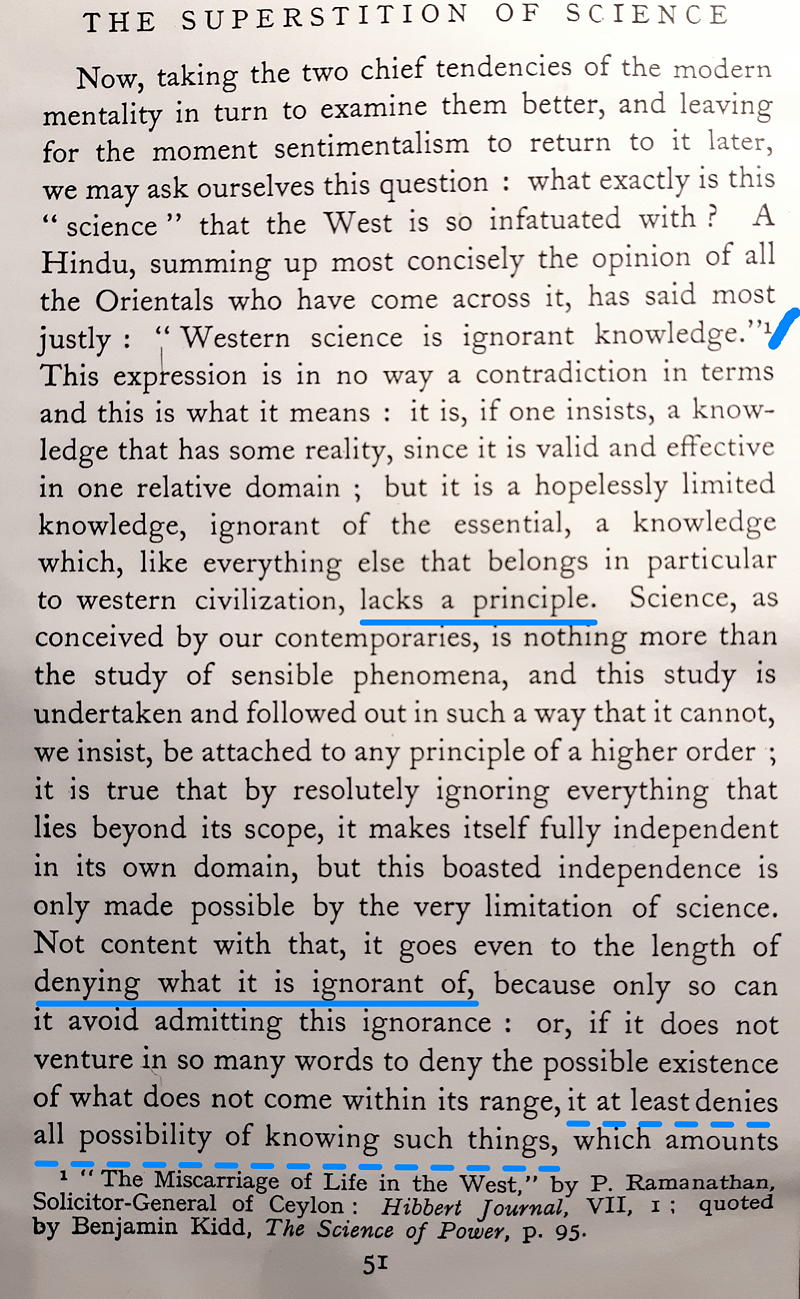 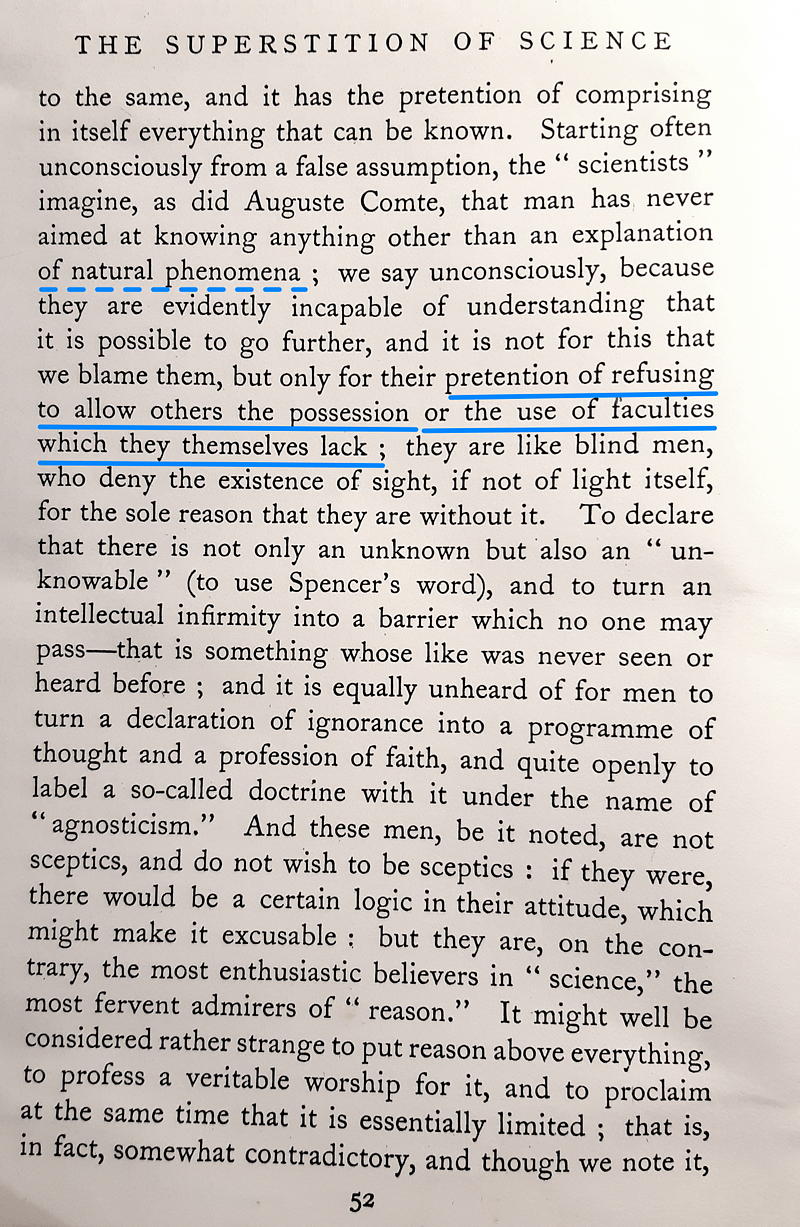 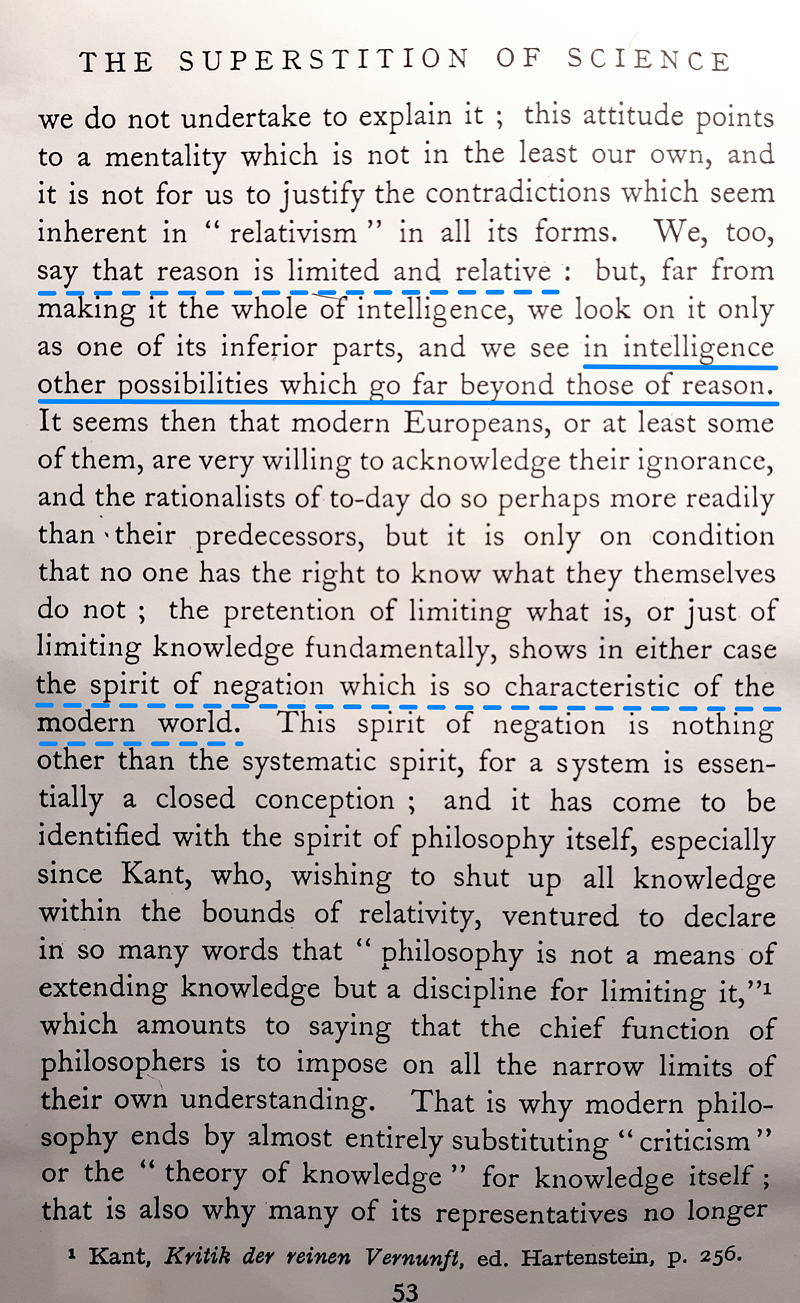 Modern Science Was Not Created in a Vacuum

Modern science has its own world view. No science is created in a vacuum. It is not at all value free; nor is it a purely objective science of reality irrespective of the subject you study. Seyyid Hossein Nasr

Islam and Modern Science, A Lecture by Seyyid Hossein Nasr

Understanding the Limits of Modern Science

I believe we should take a much humbler approach to knowledge, in the sense that if you look carefully at the way science works, you’ll see that yes, it is wonderful — magnificent! — but it has limits. And we have to understand and respect those limits. And by doing that, by understanding how science advances, science really becomes a deeply spiritual conversation with the mysterious, about all the things we don’t know. Marcelo Gleiser

The Project of Modern Science Is Doomed to Fail

The project of modern science is doomed to fail, because:

Modernism is based on the idea, that everything, all people, everywhere, all over the globe throughout all the centuries, what all those people have said about the nature of reality is wrong.
The only people who (got it right), who know how things really are, is this very small group of Western European intellectuals of the last 300 years, [and their modern heirs worldwide.] That’s what the men in white cloaks have told us, so now we know.

Shorturl of this page: http://bit.ly/_susc

Living Islam - Islamic Tradition uses cookies on our website to give you a better web-experience, improve performance and for analytics. You may find out more about our 'privacy policy'. Send email if you want no cookies to be taken for your next visit.